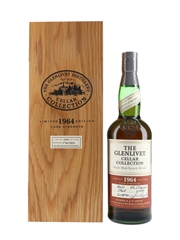 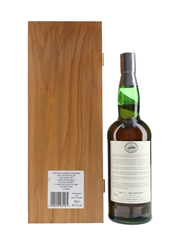 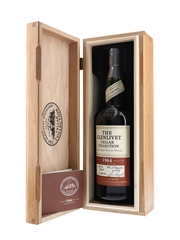 A bottle of The Glenlivet 40 Year Old Single Malt Scotch Whisky presented in an ash cabinet. This was distilled in 1964 and bottled in 2004 for the Cellar Collection series.

George Smith had been a distiller in the glen of the river Livet prior to the Excise Act of 1823 but in 1824 he became the first distiller to obtain a licence to distil. His whisky's popularity grew quickly, due in part to agent Andrew Usher, who drove sales and created Usher's Old Vatted Glenlivet, one of the first blended whisky brands. In 1858, George Smith and his son John Gordon built the Glenlivet distillery at Minmore Farm, where it remains to this day.

After World War II, single malt bottlings became more widespread, but even by the 1970s, 95% of the distillery's output was still used in blends.

Today the distillery is owned by Pernod Ricard and remains the second best-selling single malt whisky in the world, after Glenfiddich.